I wanted to write a little review regarding this LEDs. I am hoping it will help people decide whether or not to move from T5 or HQI to LEDs and are not sure how will they perform or even if they are worth it. There will be a small comparison between this LEDs and my previous Light Fixture (Metal Halide and T5HO combo), this will give you an idea of how this lights perform compared to HQI&T5s.

Now, I had thought of getting one of those cheaper LEDs from fish-street (like the K5 LEDs) but in the end, I decided for the GHL.

The main reasons were:

- LED Software programmability/Functions (a must have for me)

- Reliability (muy importante for me as well)

- Customer support (again another must)

- Ability to program the LEDs from the light itself (great option)

- External display (as before, great option)

- Heat control/dissipation (I wanted a unit that will run cool)

- Plenty of reviews out there


Whether or not these reason are enough to spend almost 3 times the money well, I will leave that for you to decide.


The reason why I didn’t go for the AI Hydra 52 or the Radion G3 Pro was mostly because I could only find these LEDs on line, and, although the lights are cheaper (around 600 pounds each) when you add things such as the remote control, hanging kits and shipping the price came very close to the price I would get the GHL lights in the shop. Another reason was coverage, the GHL can cover a great area compared to the AI and the Ecotech, this means that for my new tank (not my current one) I would need 3-4 AI/Ecotechs for 2 GHL. So, even if the GHL lights are more expensive (per unit) in the end, it would end up being cheaper. If you go online and type Radion vs Hydras or Hydra vs Mitras etc you will get mix answer, some people prefer ones, others prefer others.

Anyway so now lets talk about the light.

The lights came well packed although you would expect better packaging considering how much you pay for this lights. 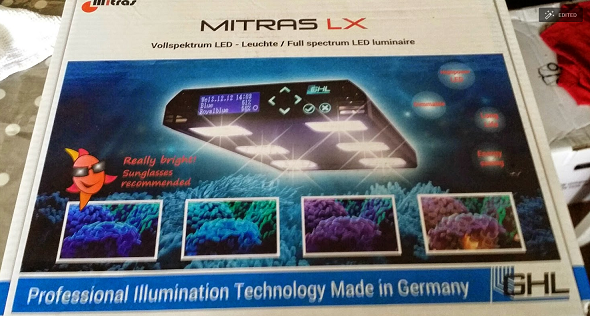 In the box not much, just the light, power supply, hanging kit, quick start guide, usb cable (to connect the light to the software) and a pair of sunglasses! 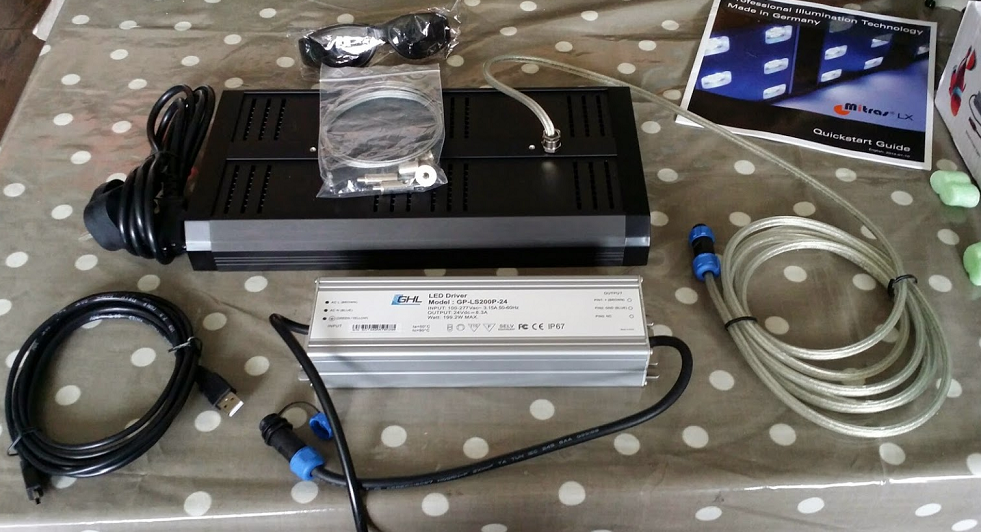 The fixture also comes with a hanging kit, easy enough to install.

GHL recommend you install the lights at least 20 cm from the edge of the aquarium (not the top of the water line). The light is meant for open aquariums and must not be used in enclosed tanks.Light coverage is 86 cm x 65 cm to a depth of 70-80 cm (depending whether the light is on high efficiency mode or high output mode, more explained later). If you require deeper penetration the is a lens you can install that will give you another 10 cm of extra depth although this will affect the light spread.

The light has 6 puckis with 12 LEDs each giving a total of 72 LEDs with 9 separately dimmable colors: 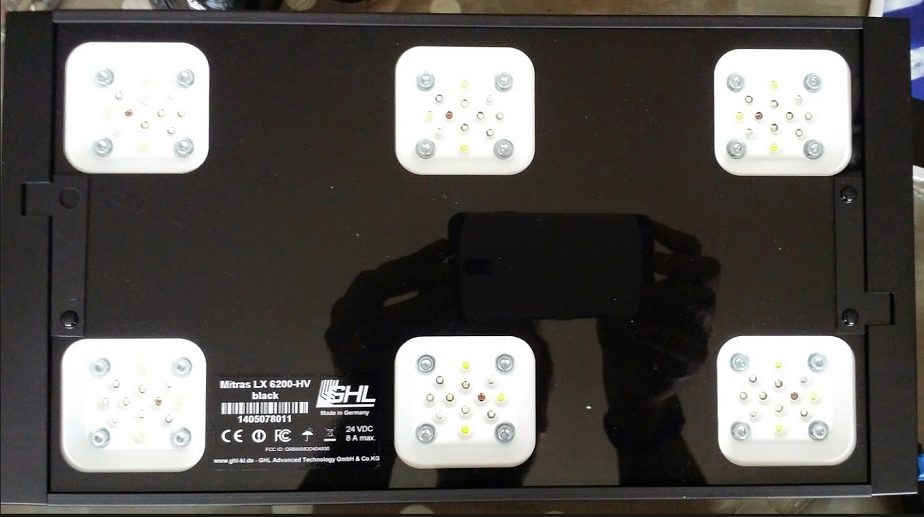 The are several ways to configure this light, on the light itself, via a USB cable (included) connected to a PC and via GHL Profilux controller (with the wireless expansion module).

I personally like the display menu, in here you can, not only change the light setting but you can also see the current light LED performance/temperature/moon cycle. 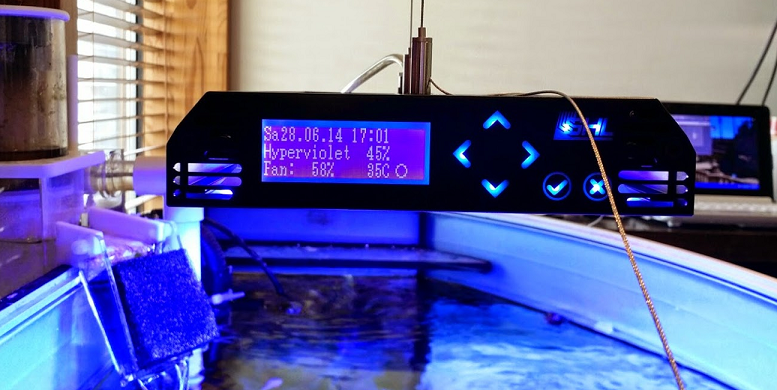 So once the light is set up I downloaded the software and installed it in my PC, connected the light to my computer and started up the program.

The light control software is decent enough, it will allow you to configure each of the 9 different channels individually, different intensities and will be able to cover ranges from 420 to 660 nm, 1000 - 24000 K, create up to 24 programs per day, the dimming also occurs smoothly (3000 steps), the light can also simulate clouds, storms, rain and full moon cycle (29.5 days). I will cover the software in a few days when I feel more comfortable with it. At this point I am only going to do some basic comparisons.

So it is time to compare this light par performance vs my previous HQI/T5HO combo.

So for I while I have been trying to find time to use my seneye to monitor PAR/light intensity. It can also measure Kelvin and wavelenghts but I will probably test it in a few days.

Let's start with just the 4 24W T5HO on their own, no metal halide 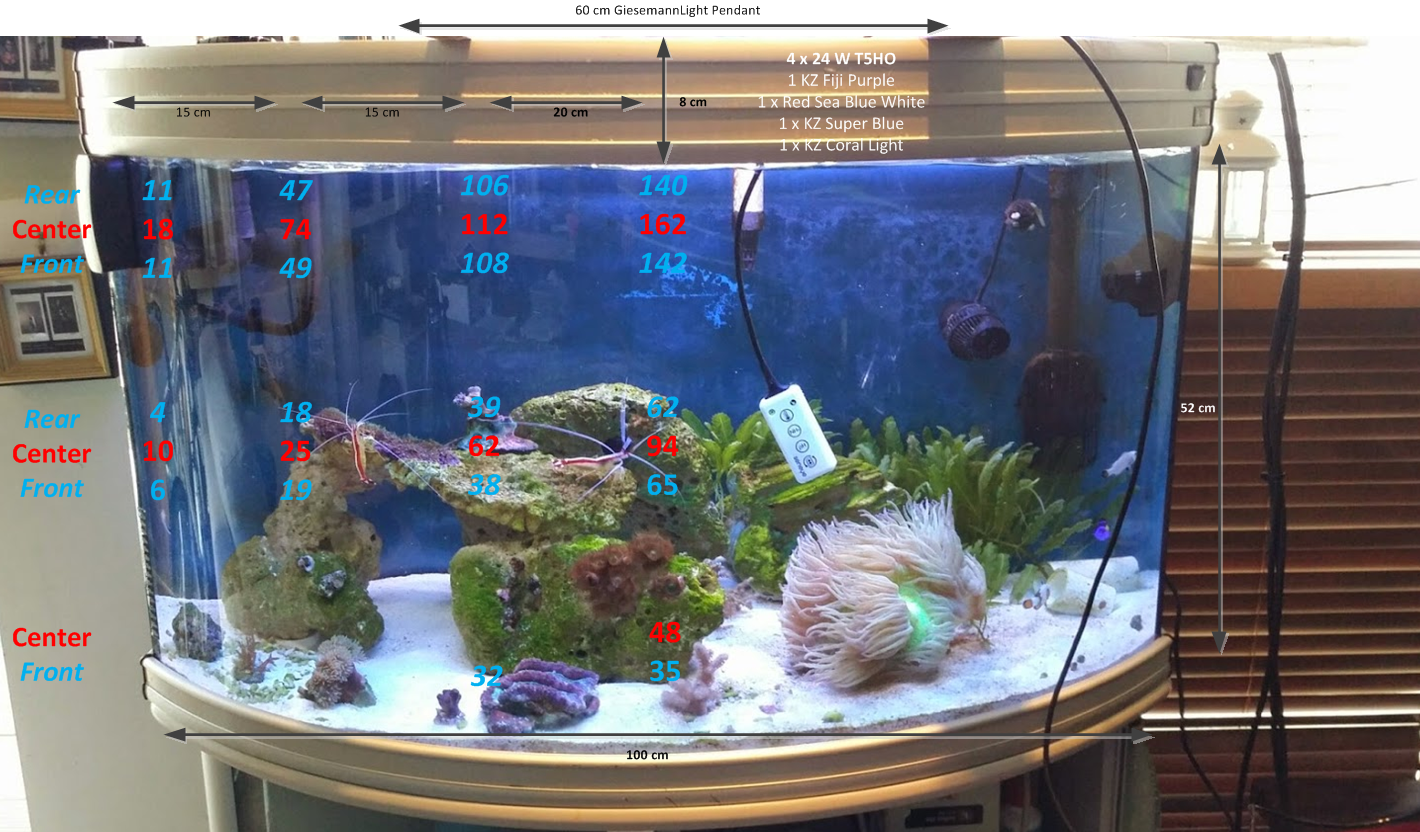 Now lets turn on the metal halide, sun glasses on! 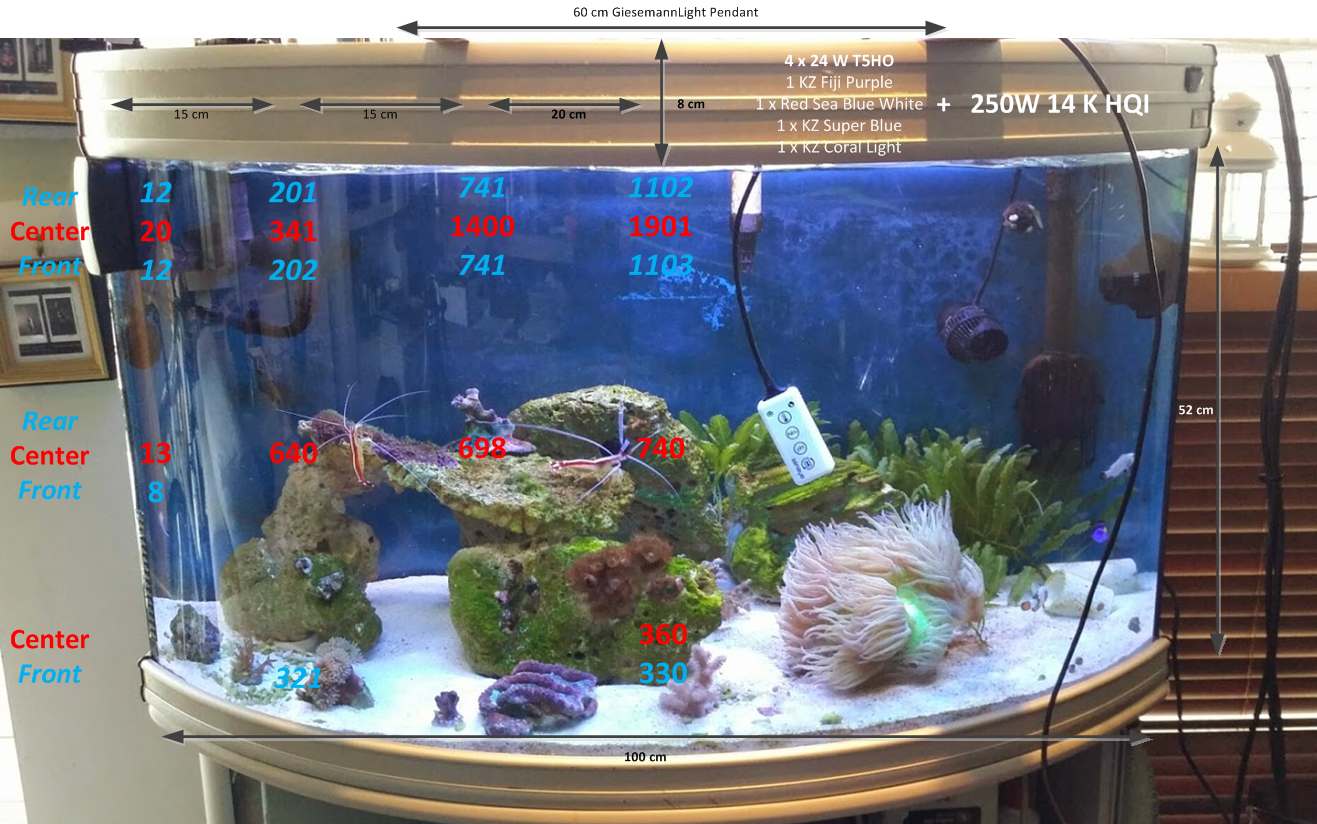 I have to say I was very impressed about the PAR output on the HQI. 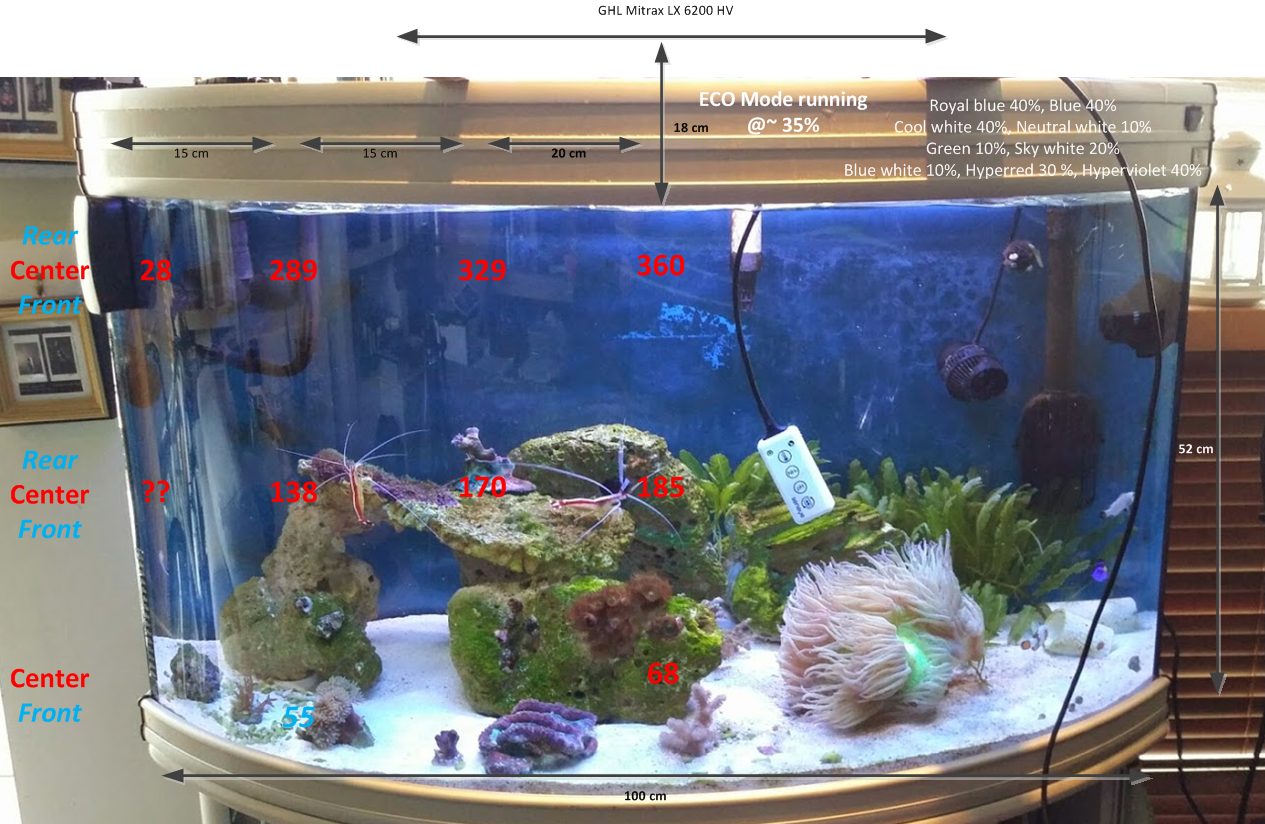 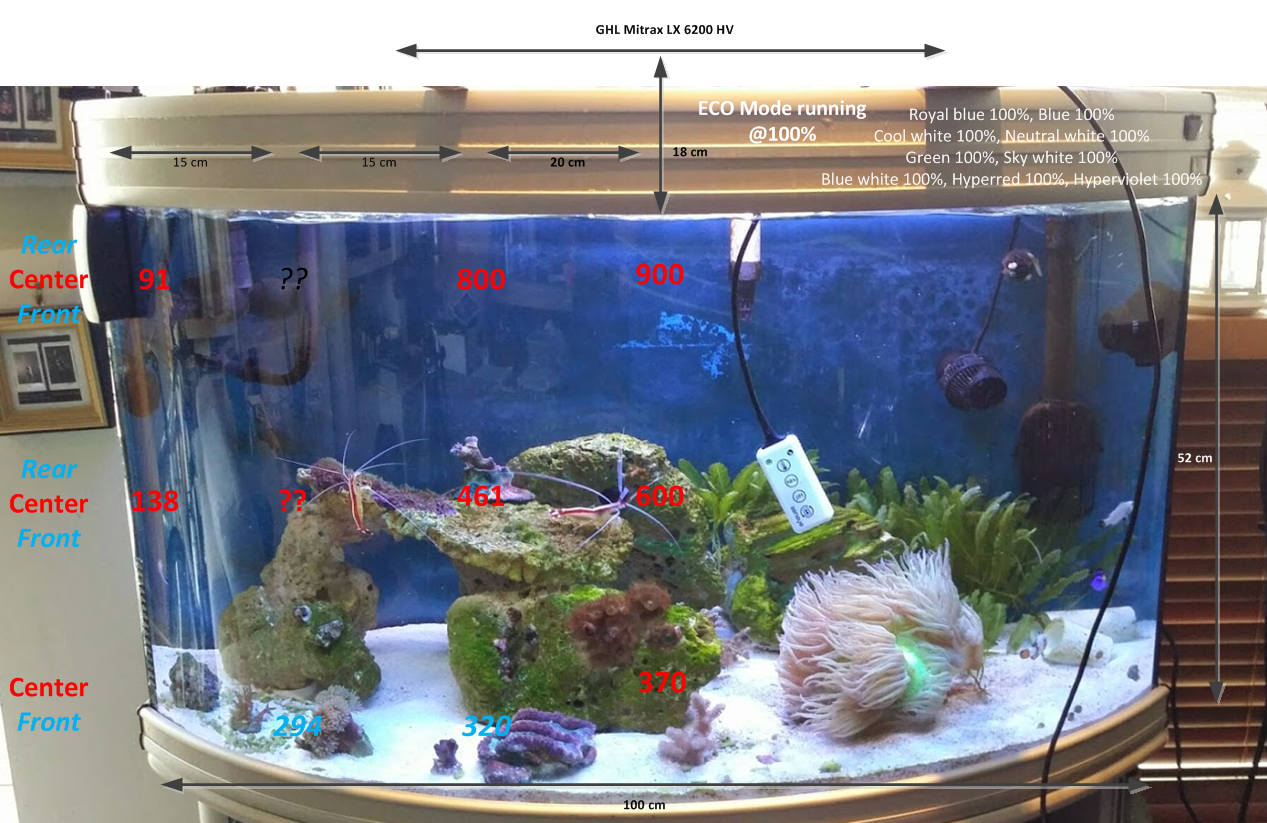 And now the lights on high power mode at 80% of maximum output power (100% brightness). Also, I have increased the height to 34 cm from the water level 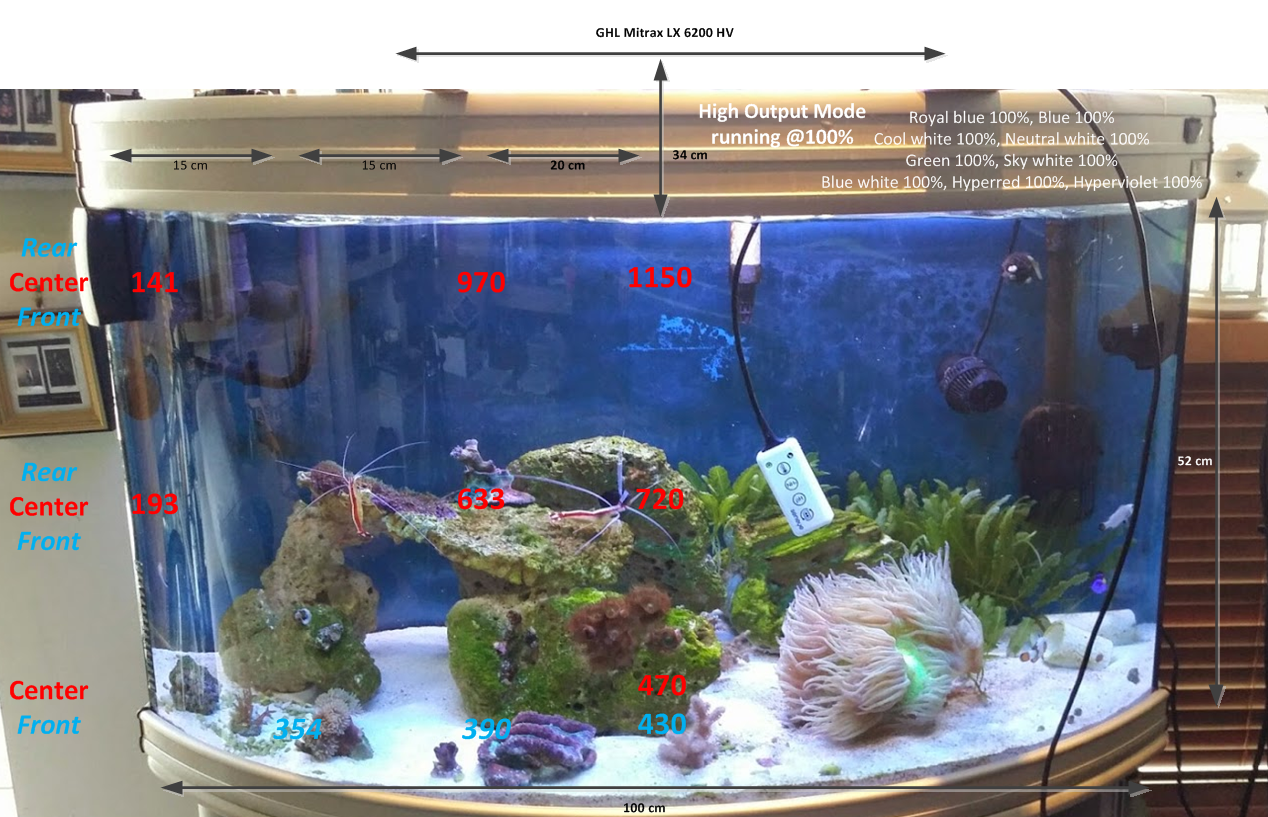 One of the most impressive things I notice is not the max output of the LEDs but how the PAR is higher at the bottom of the tank than the HQI.

I will run this test again during the weekend and try to get kelvin temperature as well as wavelength as I find it hard to believe that an LED could get more light penetration than a Metal Halide. I will keep you posted

Less More
30 Jun 2014 21:24 #2 by Bohrio (Alex Rodriguez)
Replied by Bohrio (Alex Rodriguez) on topic GHL Mitras 6200 HV quick Review and Comparison
oh just one thing, the lights have been on for only 1 day, so I can't really comment on how well the corals are doing but the tank looks fantastic (specially at night) and I can see colors that I havent seen until now.. I had to remove a lot of blue of the original pictures but the results are fantastic! 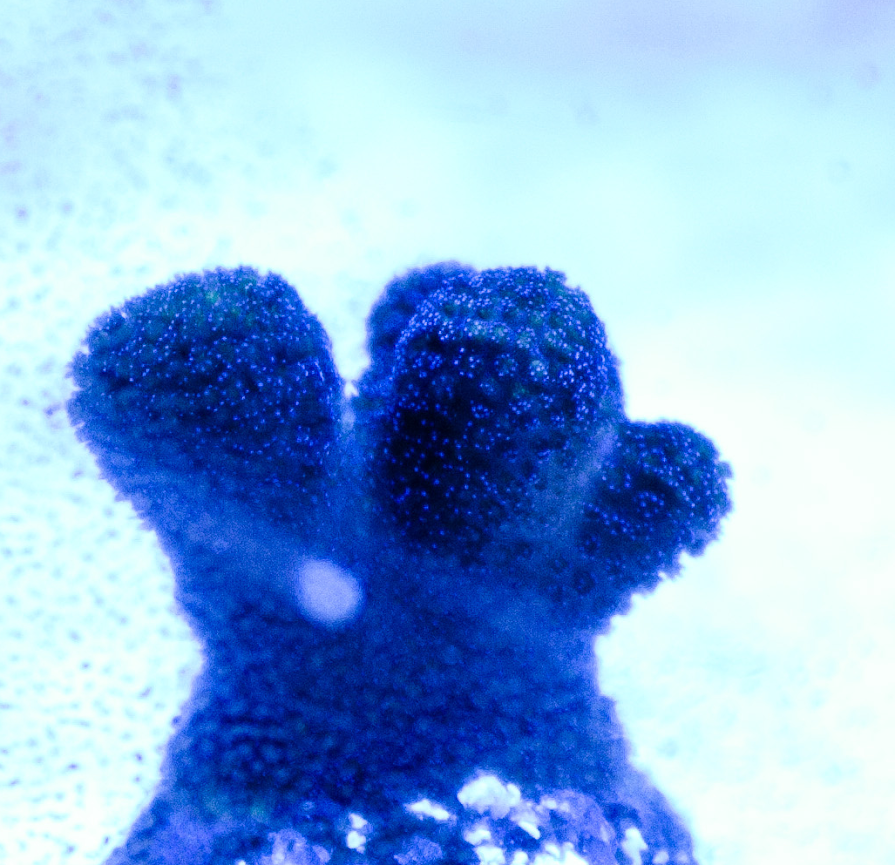 Less More
04 Jul 2014 12:09 #3 by JohnH (John)
Replied by JohnH (John) on topic GHL Mitras 6200 HV quick Review and Comparison
That's a superb and very comprehensive review Bohrio - thanks very much for taking the time to do it and post it for us to read your observations.

- for anyone considering purchasing this unit I would say you have made a very persuasive argument for it.

It's a long way to Tipperary.

So far though all I have proved is that the lights have a lot of PAR (basically that they have a lot of kick) but now I need to figure out the PUR (which is the part of the spectrum that corals use) is adequate. To understand what PAR is, PAR is the part of the spectrum between 400 nm to 700 nm that plants, corals, etc need for photosynthesis. However, only certain parts of this spectrum are used by the corals, others are used by other living organisms such as nuisance algae etc. Anything below 400 is below the UV spectrum (actinic) and it is dangerous to corals, this is why you never see bulbs go below this range (normally the lowest it goes is 380 nm). Light above the 720 nm range is considered infra red. Our visible spectral range (humans) is between 400 - 700, although our perception is much stronger between 550-620 (yellow and green spectrum). This means that, coincidentally, the light that we see most is the less usable for our corals, so if you hear someone assume that his new lights are going to be great because of how bright they are this isnt necessary true, as the spectrum that the corals need to survie is not the most visible for the human eyes.

Just remember, it is similar for freshwater. You could have a light that is putting up a lot of PAR (very bright) but almost none of the light is usable by the plants as it is in the wrong spectrum!

Chat to you later!


At the moment the corals are doing great, I am hoping to start taking some reading today or tomorrow